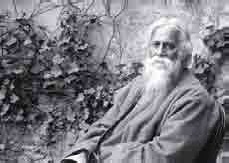 Rabindranath Tagore: A Commemorative Volume and Rabindranath Tagore: An Interpretation have
been released to mark Tagore’s 150th birth anniversary. The first Asian Noble Laureate and the only
Indian Noble Laureate for Literature, he composed the national anthems for both India and Bangladesh. He wrote poetry, novels, essays, plays and short stories and was a painter. In Bengali, his collected writings fill 31 volumes . Comparisons are often drawn between him and Irish nationalist and cultural revivalist W.B. Yeats, who introduced Tagore’s works in English to the West. Both resonate of the Romantics. Tagore’s mystical symbolism is compared with English poet-painter William Blake. Some
of his paintings compare with Blake’s, although he was more than just a mystic.
It was Tagore who named Gandhi ‘Mahatma’. That is not to say that the two agreed on everything. Whilst Tagore placed emphasis on the village and traditional Indian civilisation, he also placed faith in science and the scientific method, talking with Einstein and Heisenberg. His knowledge of villages came from his time as a manager for his family estates in what is now Bangladesh.
A school he established in Santiniketan exists to this day (Prime Minister Indira Gandhi was a student). He pioneered co-educational teaching and was more progressive on gender issues than others at that time and place. An avid traveller, Tagore visited Japan, South America, Europe, the former USSR, China and the Middle East. He also visited Italy at Mussolini’s invitation, but later denounced the dictator. He intervened in public debates against the British Raj on a range of issues. In 1919, he renounced his knighthood in protest against the Jalianwalla Bagh Massacre.
Tagore was attracted to the concept of unity in diversity. He was 80 years old when he died in Kolkata (then Calcutta) on August 7, 1941.

Posted by SHANMUGAM IAS ACADEMY at 7:32 AM